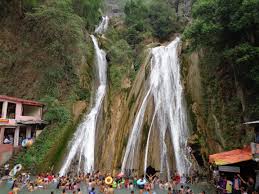 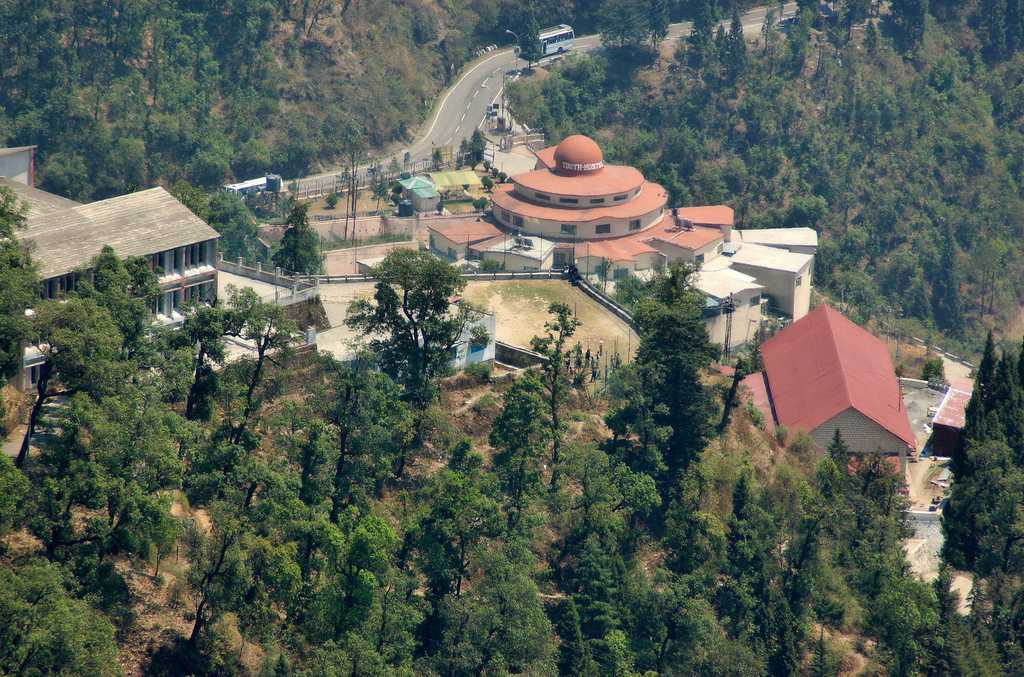 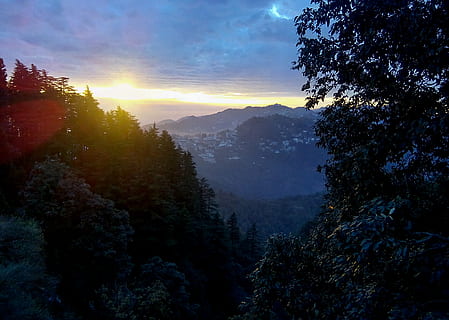 The Queen of Hills 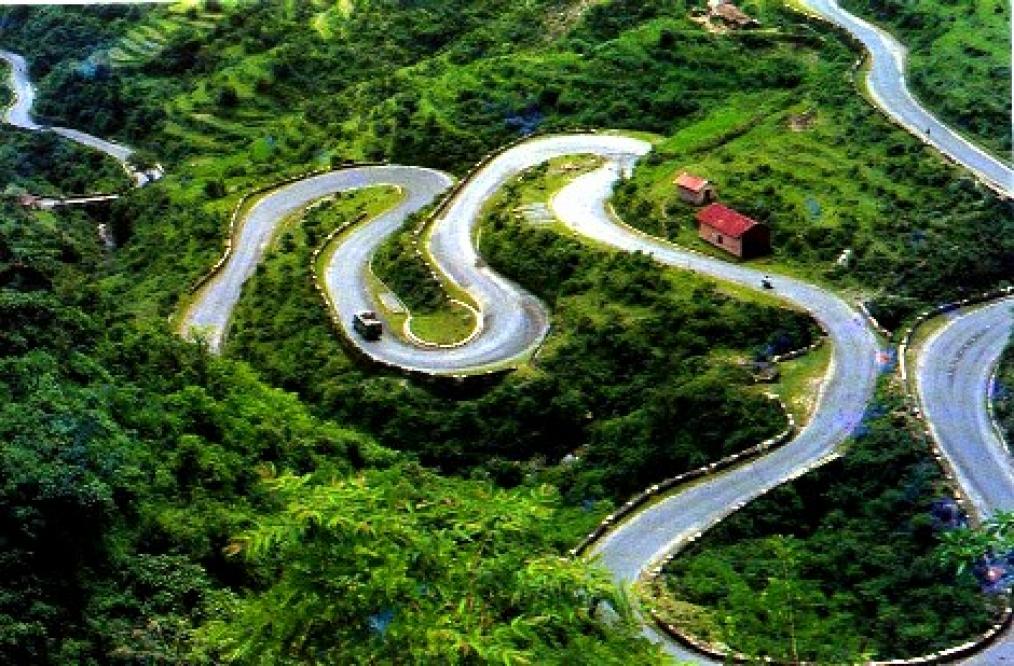 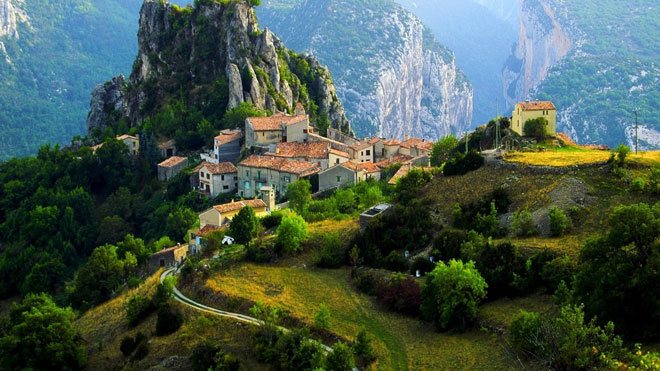 Mussoorie, Queen of the Hills, located some 290 km north of New Delhi, is among the most popular hill stations of the country. It is a captivating paradise for leisure travellers and honeymooners. A perfect summer resort and a major educational and cultural centre has been rolled into one hub. Located on a 15 km long horseshoe ridge with the grand Himalayas as a backdrop, the colonial hill resort of Mussoorie spreads across at a height of 2,005.5 m above sea level. From this vantage point, Mussoorie offers superb scenic view of peaks of the Himalayas in western Garhwal. Mussoorie boasts of some of the most spectacular views of the Himalayas. Hill ridges, irregular in shape and partly wooded, form layer after layer to the horizon, where snow capped mountain peaks are visible as though you can touch them. From West to East, the mighty peaks of Bandar Poonch, Srikantha, the Gangotri group and the Chaukhamba present a mesmerizing panorama. 34 km from Dehradun, Mussoorie overlooks the majestic Doon valley to its south and the impressive Himalayas up north. The mountains beckon climbers, trekkers and adventure sport enthusiasts. Trekkers begin their journey into the popular trekking area of Har Ki Dun with its snowscapes and verdant-forested slopes from Mussoorie. The holy River Ganga is visible from one end of the ridge and Yamuna from the other, a stretch of around 20 km in all, from Cloud’s end in the west to Jabarkhet in the east.One of the most easily accessible hill stations in Northern India, during the peak tourist season, Mussoorie becomes a bustling resort with hordes of holiday-makers ambling down the central Mall. The suburban area of Landour, about 300 m away from the main town, is quieter and has managed to retain some of its old colonial charm. Surrounded by lush wooded expanses and winding lanes, it offers exclusive opportunities for quiet walks. It overlooks the sprawling Doon valley and the city of Dehradun, the gateway to Mussoorie and to entire Garhwal.

Although Mussoorie, as a hill station, was established in 1825 by captain Young, it has quite an intriguing past. Mussoorie was never an official summer capital like Shimla – a hill station in the state of Himachal Pradesh which was the summer capital of the British Indian government or even like Nainital – the summer capital of the United Provinces Government in British India. Mussoorie always remained unofficial – for the affairs of the heart. It has always been a gossip place – with an air of informality and a tradition of romance – The Honeymoon Capital of India.

It was due to the conquest of the Garhwal and the Dehra in 1803 by the Gorkhas, under Umer Singh Thapa that Mussoorie implicitly came into existence. It was natural after that, at some point of time the interest of British security would have clashed with the expansionist policies of the Gorkhas and although the immediate cause of the war was different, another war inevitably broke out on November 1, 1814 and Dehradun was evacuated of the Gorkhas by 1815 and was annexed to the district of Saharanpur by 1819.

The history of Mussoorie town dates back to 1825 when Captain Young, an adventurous British military officer, together with one Mr. Shore, the resident Superintendent of Revenues at Dehradun, explored the present site and jointly constructed a shooting lodge. This laid the foundation of this holiday resort which now has few rivals. Its name is derived from a shrub locally called mansoor behind the house of the Captain. Some believe that perhaps that is reason behind the name of the town, which is also known as Mansoori among the natives of the surrounding area.

Before the British came, there were only shepherds whose animals grazed on the ‘Mansur’ shrub. It is natural to suppose that the officers located the hills and eventually climbed them in search of sport and recreation. The first house erected on the ridge of Mussoorie was a small hut built on the Camel’s back as a shooting box by Mr. Shore, the then Joint Magistrate and superintendent of revenues of the Doon and Captain Young of the Sirmur Rifles in 1823. Soon Captain Young built his large residence called ‘Mullingar’ as his residence as the Commandant of Landour. The splendid climate and the good sport obtainable gradually attracted other Europeans. As the Doon and the hills to the north became better known in 1827, the Government established a convalescent depot for European soldiers at Landour. The town grew rapidly and a hundred years on, it had grown into a major settlement for the homesick British, away from the heat and dust of the plains.

In April 1959, after fleeing Chinese occupation of Tibet, the Dalai Lama decided to establish the Tibetan Government of Exile in Mussoorie, which eventually moved to Dharamshala in Himachal Pradesh. The first Tibetan school was established in Mussoorie in 1960. Today, some 5,000 Tibetans live in Mussoorie.

Mussoorie is a wonderful place to unwind. Here you do what Mussoorie encourages you to do to your heart’s content.

The modern bungalows, malls and well-laid gardens located on the small hills around the area are enough to attract any tourist. The town has unavoidable romance in the air – an excellent breathing space for tourists and people who seek relief from the hot sultry conditions of the plains. Nature has gifted Mussoorie everything, which makes a place charming and cherubic.

Mussoorie offers a beautiful nature walk known as Camel’s Back Road. This road takes its name from a hill shaped like a camel’s hump. There is also Gun Hill where cannons were kept for the defence of the town. The oldest Christian church in the Himalayas, St. Mary’s, is situated above Mall Road, and is currently undergoing restoration. Kempty Falls is a nice picnic spot. Company Garden (now Municipal Garden) is another popular tourist spot. During the season, the Company Garden presents a beautiful collection of flowers and plants. The Happy Valley has a small Tibetan temple. This was the first Tibetan temple built in India. The temple was constructed in 1960 by the Tibetan refugees. Lal Tibba is another tourist spot of Mussoorie. Beautiful Dhanaulti is about 24 kilometers from Mussoorie. Mussoorie also has India’s largest roller skating rink.

The main promenade in Mussoorie is called, as in other hill stations, the Mall. In Mussoorie, the Mall stretches from Picture Palace at its eastern end to the Public Library, Gandhi Chowk at its western end. During the British Raj, signs on the Mall expressly stated – ‘Indians and Dogs Not Allowed’; racist signs of this type were common place in hill stations, which were founded ‘by and for’ the British. Motilal Nehru, the father of Jawahar Lal Nehru, deliberately broke this rule every day whenever he was in Mussoorie, and would pay the fine. The Nehru family, including Nehru’s daughter Indira (Indira Gandhi) were frequent visitors to Mussoorie in the 1920s, 1930s and 1940s. They also spent much time in Dehradun, where Nehru’s sister Vijayalakshmi Pandit ultimately settled.

An idyllic stroll through any of the meandering mountain roads of the town on a clear and sunny day will bring you to some of the well known and not so well known spots – each having its own tales to tell – Landour Bazaar, Chaar Dukaan, Lal Tibba, Gun Hill, the Camel Back cemetery, the Mussoorie Library, and of course the Hotel Savoy – an historical edifice in itself. You may be able to recognize any or all of the old houses and estates or you may meet some descendant of any of the many well – known families of Mussoorie.

The weather is generally bright and clear – except during the three months (June to August) of Monsoons, – when mists envelope the mountain slopes and paints the sky with a mauve glow while the woods around – of pine, cedar, birch, oak, rhododendron and deodar – erupt greener. There usually is a bright Christmas and the breathtaking view of the snow-clad Mussoorie gives it the name – the Queen among hill stations. There are popular picnic spots in and around the town – Kempty Falls in the west and Dhanaulti, further up beyond the town.

Mussoorie has some lovely and charming old houses and estates, usually with names derived from the native places of those who built and lived in them. Today these old houses and estates are owned by financially well-off Indians, many of whom follow the life styles of their former colonial rulers. In most cases, the old names have been retained.

Some of these old graceful houses are – Captain Young’s Mullingar Mansion, the oldest existing building in Mussoorie, Houses of Irish pioneers – Tipperary, Killarney, Shemrock cottage and the Tara hall, the houses of Scot pioneers – Scottsburn, Wolfsburn and of course the houses of the English rulers – Connaught Castle, Grey castle, Hampton court and Castle hill. There evidently were a lot of fans of the legendary writer Sir Walter Scott as we find old estates of the name of Kenilworth, Rockeby, Waverly and also Abootsford – the name of Sir Scott’s own house in England.

There are quite a few well – known families in Mussoorie, who over the times have become a part of the history, culture and the landscape of this place – the Rajmata of Jind, Princess Sita of Kapurthala, the Gantzers, the Badhwars, the Barrettos, the Skinners, the Keelans, the Alters, Lala Banwarilal, Ram Chander and Brothers, Pooranchand and Sons and P.C. Hari’s family. Most of the shopkeepers of Mussoorie and Landour Bazaar are descended from the merchant who first came here with the British soldiers and settlers over 160 years ago.

At the Camel Back Cemetry, thousands of British graves cling to the steep slopes – a constant reminder of the British presence in Mussoorie. Here lie the hill stations’ first pioneers and settlers as well as Generals and common soldiers, memsahibs, gentlemen and brewers. Here also lie John Lang, the Australian born novelist and Fredrick Wilson, better known as ‘Pahadi Wilson’, who married a girl from Harsil. He was the first man to float timber down the Ganga river who lived a life which would have been the envy of kings.

GOOD Based on 172 reviews

Naveen Kumar
We recently Nanital Corbett Our trip was good !! And deepika is an excellent advisor as she helped us to plan it well! Kudos to Tiagoholidays👍

Ravi Dutt
It was an adventurous tour to Jim Corbett National Park. I have enjoyed a lot with my college friends arranged by Tiago holidays. Resort was excellent with Indore & out door activities. We had an amazing trip. Thanku guys

Sk Sk
It was amazing trip and everything provided as per plan ,we haven't face any issues and all booked travelling and hotels were amazing and on time. We enjoy everything Thanks to team holidays and specially thanks to Mr Jitendra for planning such a great trip Thank you

Mohit Kumar
I booked my tour at Tiago holidays and its gave me excellent and very memorable experience of my trip of Kanatal &Tehri . Such a good service traveling agency thanx to Tiago holidays.

Tiago Holidays is one of the fastest growing travel portal in India. We are expert of Honeymoon package, Jim Corbett tour packages, Nainital holiday packages, Chardham yatra and many Domestic Destination packages. At Tiago Holidays we believe in providing best travel solutions as per your taste & preference.